The value rally is only starting to warm up

What is value investing?

We define value stocks as those that are cheap relative to their long-run Free Cash Flow (FCF) generation. Their business models are usually relatively stable, capital allocation is disciplined, and they are conservatively financed.

Value investing is focused on buying these stocks when their market expectations are lower than justified, and they are trading below their fundamental value.

On the other end of the investing spectrum is glamour investing. Glamour investing involves buying the stocks of companies that are expected to grow faster than the rest of the market. These companies usually reinvest any cash flow back into the business to expand quickly, often at the cost of delaying profitability.

Why do value stocks outperform glamour stocks and the market?

Numerous studies1 have shown that there is no persistence in growth. This means that even amongst those companies that have grown their earnings the strongest historically, future persistence in the growth of earnings before tax is indistinguishable from coin flips over the long term.

Despite this evidence, analysts and investors persevere in assigning higher multiples to those companies that have grown at high rates historically, despite there being no evidence that past growth correlates with long-term growth.

Value investors are focused on the current earnings power of the company. While growth is expected from value stocks, value investors refuse to pay up for growth. Therefore, even if the growth does not materialise as expected, value investors can still generate attractive returns.

Is the value rally over?

The 12 months to the end of September 2022 were the best for value performance relative to the performance of glamour companies since the autumn of 2001, after the dotcom bubble burst. This has led to investors being concerned that they may have missed the value rally.

We believe we are in the very early stages of the current value rally.

Value rallies tend to last years and to be persistent in nature. Post the bursting of the dotcom bubble in the late 1990’s, not only did growth stocks decline sharply during the bust, but they failed to outperform for another five years.

The outperformance of value stocks was driven by the market realising that the so-called ‘Secular Growth’ stocks were in fact deeply cyclical companies whose growth looked structural due to a massive investment cycle.

Value stocks also outperformed in the economic slowdown that followed.

Value stocks held up during the 2000 sell off

When do value stocks perform best?
(In situations like today)

1. Value stocks are most attractive when their valuation is at a significant discount to growth stocks. This is the case today. Despite the strong relative performance of value stocks vs. growth stocks since the announcement of the vaccine efficacy in November 2020 the valuation discount has barely narrowed. The outperformance of value stocks has come from the stability and moderate growth in their cash flows. This is the opposite of the growth stocks which enjoyed a one-off event that made their cyclical earnings look like they were destined for structural growth.

2. Value performs well after poor five-year periods. The five-year period to December 2020 was a very weak period for value. The cheapest quintile of S&P 500 stocks by P/E delivered 7.80% per year for that period. The good news is that with value investing it’s always darkest before the dawn.

3. Value performs well when the macro environment is supportive. Value strategies outperform in both bear-flattening regimes and bear-steepening regimes.2

4. Value can be the beneficiary when investment moves from intangibles to tangibles. A recession may bring rates back down but the era of lower lows in interest rates is over. We have moved from a world where the fear was that inflation would drop too low to one where the fear is that inflation breaks out on the upside. This environment will alter monetary policy and the valuation of numerous assets. Permanently zero rates favoured fixed income, equities which behaved like fixed income, intangible assets such as US technology and internet stocks, cryptocurrencies, and other speculative investments. Now that the days of zero rates are gone those names with exposure to the real economy will benefit. Commodities, energy, value stocks and real assets (including housing) should all perform well as we move to an era of real investment and investment in the energy transition.

Where is the value?

Europe, including the UK, is the epicentre of the value opportunity.

Shiller PE’s of US, Europe and the UK 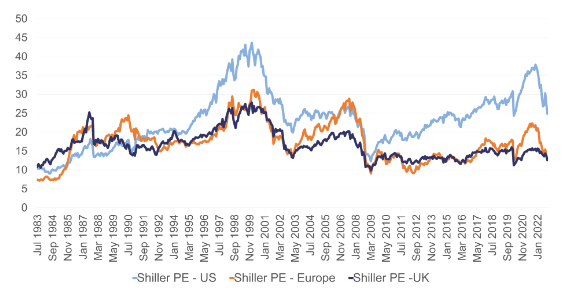 Despite the war in Ukraine and the economic weakness that will stem from the gas crisis, the prospects to make supernormal returns from European equities has rarely been this attractive. The combined PE ratio (average of the forward PE, trailing PE, and PE 10 ratios) has dropped to extreme cheap levels. It is almost on par with levels seen at the bottom of the dotcom bubble burst, and the 2020 bear market. It has yet to plummet to the absolute lows seen during the global financial crisis and subsequent European sovereign debt crisis, but we are not far off. The situation today is nowhere near as dire.

According to Bloomberg the region also looks like a bright spot from an earnings standpoint. The next 12-month bottom-up earnings estimates for European equities just hit a 10-year high.

Sentiment is also improving off a low base. European institutional investors are becoming slightly less pessimistic.

The lack of value investors creates an opportunity

Value investors are a dying breed, this creates an opportunity. During the speculative mania that we have witnessed value investors have struggled to stay afloat. Some capitulated and bought in to the speculation, others went out of business. Morningstar data indicates that only 5-10% of managed assets are value strategies. The last time value strategies were this out of favour it set up a five-year period of massive outperformance.

The declining number of value funds

Being a value investor is inherently contrarian. The holding period for most institutional money managers sits well below one year. We are in an extreme minority. We are long-term, fundamental value investors willing to tolerate short-term relative pain in the pursuit of long-term returns.

Value investing is a dying art, and this creates the opportunity. Ignoring short termism and investor fads provides us with our edge.

We strongly believe that over the long term our sound process will deliver superior results. We believe that today is one of the best points in history to invest in a value strategy.

A value strategy will not outperform every week, every month, every quarter or even every year. But we believe that over multi-year periods value investing will triumph.

Any views and opinions are those of the Fund Managers, and coverage of any assets held must be taken in context of the constitution of the fund and in no way reflect an investment recommendation.

Capital at risk. If you invest in any Gresham House funds, you may lose some or all of the money you invest. The value of your investment may go down as well as up. This investment may be affected by changes in currency exchange rates. Past performance is not necessarily a guide to future performance.

The above disclaimer and limitations of liability are applicable to the fullest extent permitted by law, whether in Contract, Statute, Tort (including without limitation, negligence) or otherwise.

Is it time to buy equities?

There is a lot going on in equity markets today, so answering the question whether it’s time to buy equities is not... Read more

Is it safe to buy bonds?

Whilst most investors are fully aware that equity markets have been disappointing in 2022, what is less reported is... Read more

Has the crescendo of fear brought the US Dollar to a peak?

The last year has seen considerable negativity across many asset classes. Bond markets have fallen into their first... Read more

With negative overriding feeling within markets but a sense that a recession has already been priced in, we take a look... Read more

In the latest in our CEO interview series, Tony catches up with Managing Director, Rupert Robinson. Watch video 6min

Where are you based?

Which of these best describes you?

< Back to audience selector

Gresham House asks you to consent to the use of cookies, to store and access basic, first-party data about your website usage. Some of these cookies are essential to our site working properly and others help us improve the site by providing insight into how the site is being used. To allow us to provide the best website experience, we recommend that you accept the use of all cookies. Please note that some data processing may not require your consent but you have the right to object to such processing. Please read our online privacy and cookie policy which is available on our website.

Data collected in this category is essential to provide our services to you. The data is necessary for the website to operate and to maintain your security and privacy while using the website. These cookies are always on as they are critical to the website functioning correctly. This data is not used for marketing purposes or the purposes covered by the two categories below.

Data collected in this category is used to inform us about how the website is used, to improve functionality on our website and to help us to identify issues you may have when accessing our website. This data is not used to target you with advertising.

Data collected in this category is used to help make our messages more relevant to you. The data may be shared with our media partners and platforms we may use to deliver personalised advertisements and messages.